Yesterday members of the Accessible News team were out looking at accessibility to play areas, especially the accessibility of Oaklands in Cilfynydd.  This was brought to our attention by Mia Thorne, Child Ambassador for Caudwell Children’s Charity

.  Mia is an inspirational young lady who is campaigning for equality for people with disabilities in the areas of

who is also working closely with Mia on the above issues. Richard Jones visited a play area in Cilfynydd which Mia would like to make accessible.  The access to the park is very problematic for people with varying disabilities and some of the equipment are unsuitable for purpose. Rust and nails on one of the pieces of equipment

Currently the park has some play equipment which is out of date and in poor condition.  There is a step to get in the play area and rust and nails sticking out of some pieces of equipment, there is also a situation with the flooring on play area as it is wood bark (or similar), this could cause pain and discomfort to any child who may fall on it. There were other access issues outside the park which would hamper access to the park such as local people parking on the pavement and the fact that there was no pavement on the side of the park. Cars parking on the pavements can be an access issues for lots of people, not just people with disabilities

It was also noted that the entry to the park was via a step and an extremly steep ramp which was on a slight gradient.  This was something that would be difficult for people in wheelchairs and people with mobility difficulties. 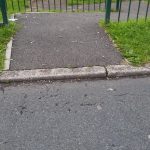 Stepped access to the ramp leading to the park 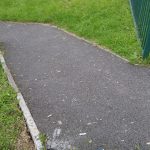 Steep ramp leading from the road to the park 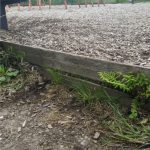 Rhondda Cynon Taff have chosen this park as one of a number which are going to be improved as part of £500k spend on play areas but Mia is keen to ensure that when this park is redeveloped it’s done with accessibility in mind. Cllr Barry Morgan also met with Mia and the Accessible News team and is very proactively supporting the move to make the play area more accessible, however, he is keen to ensure that once the park is made accessible, it is kept safe, and rightly so.  Richard Jones says the following on the future work planned at the park.

It is a fantastic announcement, firstly, that Rhondda Cynon Taff are investing in play areas and also great to know that they are investing in improving accessibility.  Mia has done fantastic work to raise the importance of accessibility to this play area, it is our job now to ensure that Rhondda Cynon Taff go as far as they can to make this accessible.

Richard will be contacting the appropriate Rhondda Cynon Taff councillors to ensure that the plans are up to specification and that they are as accessible as they can be.  We know that it is almost impossible to get 100% accessibility, and we also fully acknowledge that what is accessible for one person is not always accessible for others but we want to work to find the best outcome.

When asked about working with Mia Richard said the following:

Mia is an inspiration, and a breath of fresh air.  She is a young lady who puts the needs of others before herself and works tirelessly to help improve other people’s lives.  I think Mia is going to go on and become an unstoppable force, and the Accessible News team and I will do anything we can to help.

Play areas are something that Accessible News has had previous experience with as we’ve worked with tenants and residents in Glyncoch to help improve the access to one of their play areas. No unauthorised motor vehicles they say!

We’re not sure if Richard’s wheelchair constitutes an unauthorised motor vehicle but he couldn’t resist.  If you have a play area you’d like to improve the access to or another access issue in South East Wales get in touch and we will see if we can help.